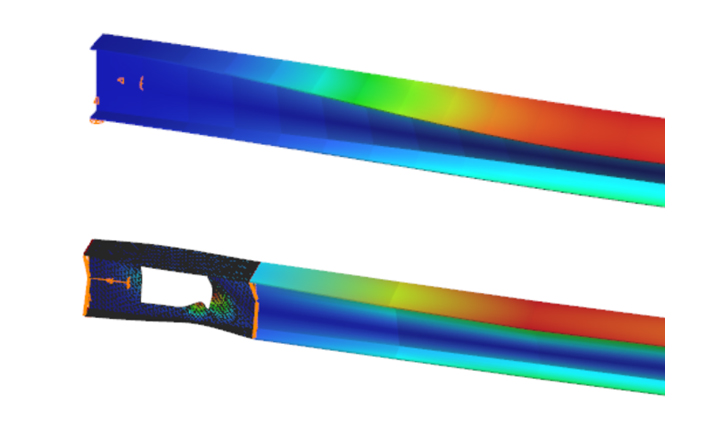 Effect of web openings on LTB

Are you wondering how a web opening would influence the lateral-torsional buckling resistance of your beam? Check it precisely with a Consteel Superbeam based analysis

It is often required to let services pass through the web of beams. In such cases the common solution is to provide the required number of opening in the webplate. Such an opening can have a circular or rectangular shape, depending on the amount, size and shape of pipes or ventilation or cable trays.

Beams must be designed to have the required against lateral-torsional buckling. The design procedure defined in Eurocode 3 is based on the evaluation of the critical bending moment value which provides the slenderness value, needed to calculate the reduction factor used for the design verification.

There is no analytical formula provided in the code for beams with web openings. Would the neglection of such cutouts cause a miscalculated and unsafe estimation of the critical moment value?

The following demonstration will be made with a 6 meters long simple supported floor beam with a welded section.

Exposed to a linear load of 10 kN/m, the critical bending moment value of the solid web beam can be obtained by performing a Linear Buckling Analysis (LBA) with Consteel.

How would this value change if a rectangular opening needs to be cut into the web of this beam?

By looking to the analytical formula (ENV 1993-1-1 F.4) to calculate the critical moment of double symmetric sections loaded at eccentric load application point it becomes obvious that the section properties having effect on the moment value are Iz, Iw and It.

An opening in the web has no effect on the first two values and has very little effect on the last one. As it has been already shown in previous article, the presence of such an opening can have effect on the vertical deflection, but as long as the lateral stiffness of a beam is much lower than it’s strong axis stiffness, the vertical deflections can be neglected when the lateral-torsional buckling resistance is calculated. The usual linear buckling analysis (LBA) performed also by Consteel neglects the pre-buckling deformations.

Therefore one can expect that in general web openings can be disregarded when the critical moment value is calculated.

Opening can be positioned easily along the web, either as an individual opening or as a group of openings placed equidistantly. The opening can be rectangular, circular or even hexagonal. Circular openings can be completed with an additional circular ring stiffener.

The rectangular opening for this example can be easily defined with this tool. As there is no need to provide any additional opening on the remaining part of the beam, only the first part which includes the opening will be modelled with shell elements and the rest can still be modelled with beam finite elements. Using this technique, the total degrees of freedom of the model can be kept as low as possible. When using Superbeam, the designer has the choice whether to use beam or shell finite elements, as appropriate.

As the result of the new analysis using Consteel Superbeam with a mixed model from shell and beam elements, the obtained value of the first critical multiplier is 2.99 which is virtually identical to the value obtained with the beam with solid web.

This confirms the feeling that in general such a web opening may not significantly impact the lateral-torsional buckling resistance of a simple supported beam.

But this can change when for example the same beam would have fixed end conditions. In this case the region with the opening is close to the position of change of sign of bending moment, plus the weakened bottom T shape is subject to elevated compression combined with an unstiffened edge of the opening which may result in a distortion of the cross-section which causes a stiffness reduction and therefore lower critical load level.

In cases where such section distortion happens, another violation of the basic assumptions of Bernoulli-Navier Hypothesis used also by the 7DOF beam finite element happens.

In order to get the most precise analysis results, the use of shell elements is recommended at locations where the assumptions of a beam finite element are significantly violated. Consteel Superbeam provides to the designer a very efficient tool to analyse such critical parts locally with shell elements and continue to use the well established 7DOF beam elements elsewhere. This provides an optimum compromise between analysis result precision and size of finite elements model and solution time.