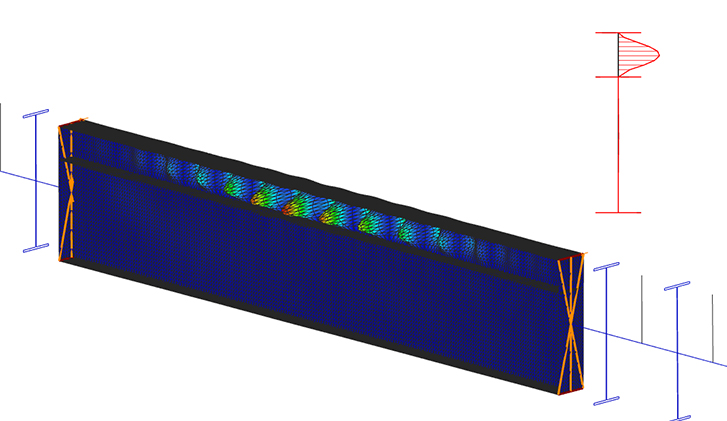 Analysis of members with class 4 slender web by Superbeam

Beam with welded I sections are often executed with slender webs. This is mainly due to the recognition that the main contributors to bending stiffness of a beam are the flanges. The web plate’s main role is to safely keep these flanges away from each other and carry the shear stresses which might be present. Significant weight saving can be achieved with the use of slender webs, but there are some aspects to take care about.

When slender web plates are exposed to longitudinal, uniform normal stresses, above a certain stress level its distribution will no longer remain uniform. A compressed region of a plate distant from its lateral supports may buckle in a direction perpendicular to the acting external normal stresses, causing a subsequent transfer of stresses from the affected region to other neighbouring regions remaining in their unbuckled position.

This buckling remains limited to a part of the plate keeping other parts intact and therefore is called as local buckling. Local buckling usually does not result an immediate collapse of the structure, due to possibility of the stresses to redistribute and often even a substantial amount of further load increases are possible.

where σcr is the critical stress level above of which the stress redistribution and local buckling starts to appear. A higher critical stress will result in lower slenderness value which indicates that the plate can carry higher compressive stresses without the initiation of local buckling.

Analysis of cross-sections with Consteel Superbeam

The Consteel Superbeam function makes possible to confirm directly the presence of local buckling using the same beam element based model, but using a mixed beam and shell finite element modelling and analysis approach. Using the Superbeam tool, complete structural members or parts of them can be alternatively modelled with shell elements and the rest can still be modelled with beam finite elements. Using this technique, the total degrees of freedom of the model can be kept as low as possible. When using Superbeam, the designer has the choice whether to use beam or shell finite elements, as appropriate.

Contrary to beam finite elements, modelling with shell finite elements doesn’t have the previously mentioned limitations. This approach can fully consider the shape and location of the cross-section’s internal components instead of the use of an integrated overall section property. When a linear buckling analysis (LBA) is performed, the critical stress multipliers corresponding to the actual stress distribution can be obtained. Additionally to the load multipliers, the corresponding buckling shapes are also available, giving direct indication on the location, shape and appearance of local buckling within the compressed parts of the cross-section.

The use of effective cross-section concept is very convenient but there might be cases when more insight view is desired. The following example gives an idea where the Superbeam function can be helpful.

When the beam is analysed with 7DOF beam finite elements, one can obtain the critical load multiplier of 5.2 of the global buckling mode, which is lateral-torsional buckling (LTB) in this case.

The beam finite element cannot give any visible indication about possible local buckling in compressed plates of the cross-sections.

As the maximum bending moment occurs in the middle third of this beam, it seems enough to analyse this part mode deeply with the Superbeam function. An LBA with the mixed beam and shell model gives comparable critical multiplier of 5.22 with some numeric perturbances in the part modelled with shell elements.

A transverse section of the relevant buckling mode shows clearly that the buckling mode shape has a maximum ordinate around the middle of the upper half of the web plate.

A local buckling shape of this kind does not necessarily mean automatically that the member has such a slender web where the design calculation should be performed with effective section properties. Effective properties shall be used, if the reduction factor ρ for internal compression element (the web) defined in EN 1993-1-5 with the formula (4.2) yields a value less than 1.0. This is the expected case when the plate slenderness λp has a value higher than 0.673.

As this number is lower than 1.0, it confirms the presence of such a slender compressed web, which will be unable to carry the elastic stress distribution calculated on the gross cross-section and therefore as a response to the appearance of local buckling, reduced cross section properties must be used for design verifications.

How could be avoided such a section reduction?

For example, an additional stiff enough longitudinal stiffener could be positioned close to the level of the maximum amplitude of the first buckling shape with the expectation that it will increase substantially the critical load factor corresponding to the buckling shape responsible for the reduction. Or even completely eliminate such a buckling shape. To make it efficient, additional vertical stiffeners are also recommended at the ends of the horizontal stiffener.

The standard procedure of Eurocode for the determination of effective cross-sections cannot consider the presence of such longitudinal stiffeners. Longitudinal stiffeners – among other features – can easily be placed using the auxiliary tool of Superbeam function, together with vertical stiffeners at both ends of the middle third of the beam.

By repeating the previous calculation to obtain the necessary slenderness value of the web plate, one gets σcr = 7.72*82.52=637.0 N/mm2 resulting a slenderness of 0.606 with fy = 235 MPa which falls already under the limit of 0.673 therefore no reduction is necessary to consider possible local buckling.

Of course, it is important to remember, that additionally it must be also confirmed, that the stiffener has high enough stiffness to allow to consider it as an efficient lateral line support for the web plate.

With the use of Superbeam analysis tool, the designer gets the chance to receive in-depth information about the analyzed structure, making possbible to find the most ideal solution to handle buckling related problems.