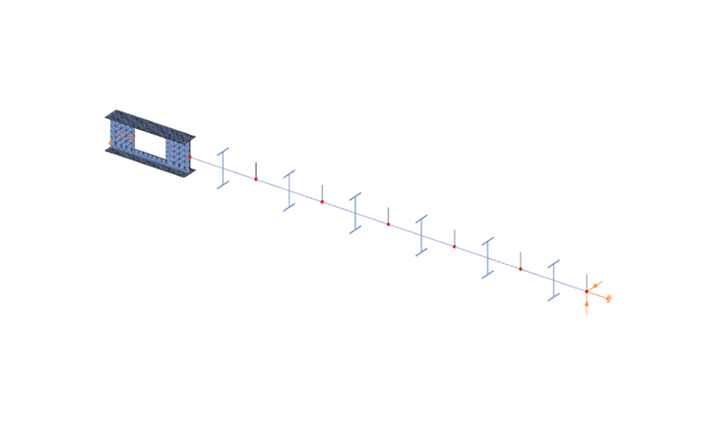 It is often required to let services pass through the web of beams. In such cases, the common solution is to provide the required number of openings in the web plate. Such an opening can have a circular or rectangular shape, depending on the amount, size and shape of pipes or ventilation or cable trays.

If the structural engineer has the freedom to position these openings along the beam, where to place them? What would be its effect on the deflection of the beam?

The effect of such openings on the deflection is more important when the length of the opening along the beam is increased. As circular openings are made with equal length and depth, they are usually less critical than rectangular openings.

The following demonstration will be made with a 6 meters long simple supported floor beam with a welded section.

Exposed to a linear load of 10 kN/m, the deflection at mid-span of the solid web beam is 4.6 mm.

Let’s assume that a 250 mm deep rectangular opening with a length of 400 mm needs to be provided on the web, at a distance of 300 mm from the left support.

Eccentricities can be easily defined in Consteel using both smart and traditional link elements.

The deflection with this refined model will be equal to 4.8 mm.

In order to find a more precise analysis result, it is possible to use shell finite elements. The new Superbeam functionality comes as a solution in such cases. Instead of using beam finite elements, let’s use shell elements!

Opening can be positioned easily along the web, either as an individual opening or as a group of openings placed equidistantly. The opening can be rectangular, circular or even hexagonal. Circular openings can be completed with an additional circular ring stiffener.

The rectangular opening for this example can be easily defined with this tool. As there is no need to provide any additional opening on the remaining part of the beam, only the first part which includes the opening will be modelled with shell elements and the rest can still be modelled with beam finite elements. Using this technique, the total degrees of freedom of the model can be kept as low as possible. When using Superbeam, the designer has the choice of whether to use beam or shell finite elements, as appropriate.

As the result of the new analysis using Consteel Superbeam with a mixed model from shell and beam elements, the precise deflection of 5.2 mm can be obtained.

This deflection is higher than the value obtained with the solution using the Vierendeel-type of structure using beam finite elements.

In order to get the most precise analysis results, the use of shell elements is recommended at locations where the assumptions of a beam finite element are significantly violated. Consteel Superbeam provides to the designer a very efficient tool to analyse such critical parts locally with shell elements and continue to use the well established 7DOF beam elements elsewhere. This provides an optimum compromise between analysis result precision and size of finite elements model and solution time.